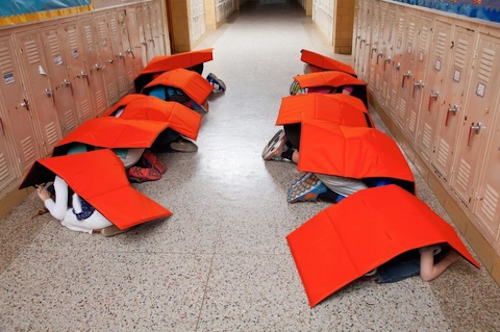 Please note that the Protecht Bodyguard® is bullet-resistant, not bulletproof. An actually bulletproof blanket would crush any seven year-old who pulled it over himself, which is something but not what we’re going for when it comes to school shootings. What we’re going for is to “stop or reduce the number of deaths,” as the Protecht website puts it. It’s an awkward phrase, but they’re kind of in an awkward position.

The thing about a blanket that protects children while madmen spray bullets around their schools is that it gets you thinking about other questions. Protecht acknowledges this marketing problem right away, and they are just as quick to make their checkmate move:

What will be done to stop or reduce the number of deaths caused by school shootings? Debates continue throughout the nation on the appropriate course of action that will need to be taken to reduce school shootings and related deaths. Our children, who attend pre-school to 12th grade and college, as well as thousands of dedicated teachers, continue to be at risk from these attacks while at school each day.

You think our bullet-resistant blanket that covers your child for the nine seconds or so it takes to bump fire a full clip through an AR-15 is funny? Fine—your child can lie there without a blanket until Congress settles gun control. I hope no bullets fly through the air while we wait.

It’s a hard world for children, as the good people at Protecht know. The Bodyguard® blanket is also designed to protect kids from tornados and “that blunt-force trauma when that rubble is falling down on a child, for instance, ” as Steve Walker put it to the Washington Post.

Walker is the Edmonton podiatrist who came up with the idea for Bodyguard®, presumably after growing up in a firecracker factory. Both he and his business partner Stan Schone offer a somewhat fatalistic construction of childhood when discussing their product. For example, here’s Schone on his blanket’s power to lessen the likelihood that your child is pierced by flying nails: “Instead of bending over and hoping for the best, they’re afforded an extra layer of protection.”

Sure, many of them will still be hit by nails, or bullets or whatever, but those nails and bullets will hit fewer children in less important parts of their bodies than if they didn’t have bullet-resistant blankets. We’re not talking about a perfect world. We’re talking about making the best of the one we have, and in our world, sooner or later, small pieces of metal are going to fly around and through our schoolchildren.

We have to think about these problems clearly. The question is not “how can we prevent bullets from flying around inside schools and, to a less- but still-important extent, in our lives generally?” That’s one for the philosophers. The real question, the one that’s relevant to our lives, is “what can we do when bullets start flying around?” And the answer is to do what we always do: crawl under the blankets and wait.