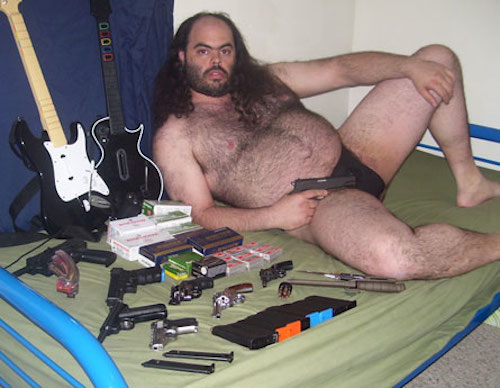 Let us take a moment to note that the guns are real in the photograph above, but the guitars are not. Somewhere there is a continuum of fantasies that runs from Rock Band controllers to the Bushmaster AR-15 with extended clip. I call that continuum America, and the good news is that you are in it. The bad news is that 350 million other people are in it, too, and their fantasy nation is slightly different from yours. Today is Friday, and America is the dream we dream together. Won’t you wake in a cold sweat with me?

Obviously, the greatest threat to our dream America is bad guys with guns. And as Wayne LaPierre pointed out, the only thing that stops a bad guy with a gun is a good guy with a gun—not a sense of decency, not the pleas of schoolchildren, nothin’. Our shared dream of universal armament came one step closer to reality earlier this month, when an altercation between legally armed men broke out in a convenience store on the first day of Georgia’s new Safe Carry Protection Act. “Essentially, it involved one customer with a gun on his hip when a second customer entered with a gun on his hip,” Valdosta Police Chief Brian Childress said. Ronald Williams, 62, drew his gun and demanded to see the other customer’s permit—like you do when you’re hanging out at a 7-11 fully prepared to use deadly force. It’s almost as if the kind of guys who want to wear a pistol everywhere are looking for trouble.

By comparison, girls who wear pistols everywhere are fun and hot. The waitresses at Shooter’s Grill in Rifle, Colorado carry .357s while serving such menu items as the M-16 burrito and the Smith & Wesson Grilled Cheese. Your child will be so happy once he gets that Smith & Wesson into his mouth. My favorite part of this Fox News article, besides the cheerful tone, is the way that owner Lauren Boebert uses “open carry” as a verb—as in, “I started open-carrying maybe a month after we opened.” Open-carrying isn’t just carrying a gun openly. It’s doing it in a way that asserts your Second Amendment rights, while incidentally reminding the people around you that you could kill them at any time.

Also, what company underwrites the health insurance for Shooter’s, where the waitresses go to work each day in a room containing half a dozen guns? Over at the New York Times, the foreign-sounding Uwe E. Reinhardt ruminates on the arbitrary practice of having employers pay for health insurance. They don’t really pay for it, of course. They take it out of wages and repackage it as a benefit, which means that you maybe get a group rate at the expense of letting your boss decide what sort of medical care you get. Given this system, the Supremes’ claim in Hobby Lobby v. Burwell that owners are paying for their workers’ insurance is kind of absurd. By the same logic, they’re paying for their workers’ everything, and they have the right to insist that employees not use their compensation to buy R-rated DVDs as much as certain kinds of birth control. On a related note, I got my health insurance back, so I am no longer agitating for a single-payer system.

I suppose the main reason I dislike guns and love socialized medicine is that my brain is hardwired to focus on opportunities and ignore threats, as anyone who knows me will tell you. The Angel Ben Gabriel sent me this article from Mother Jones, describing a study in which scientists found that people with conservative views tend to focus on disgusting or threatening stimuli in their environments. It’s called negativity bias, and it purports to explain why some people are so fixated on bad guys with guns while remaining disinterested in, say, funding public schools. I want to believe this explanation. I worry, though, that Mother Jones’s precis of this complicated scientific experiment is designed to shape my reaction. I am the negatively biased arch-conservative of textual analysis.

Why can’t I just concentrate on the good rhetoric that wants to help me? You know, like Jimmy Cliff:

It’s hard to get by just upon a smile.