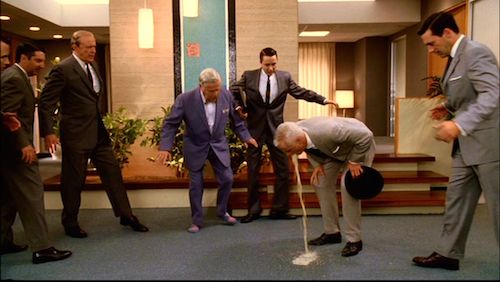 Only Don moves toward him.

Ben al-Fowlkes and I went out last night, to celebrate first good news and then life in general. Every prospect pleased and every person, if not a paragon of virtue, at least proved amusing. Life was wonderful and everything would be just fine. Our exuberance was irrational, because now life clearly sucks. You can’t really control what goes into or comes out of your body, and your so-called friends are poisoners who lie in wait. Today is Friday, and I blame forces beyond my control. Won’t you recount the perfidies with me?

Remember Wednesday, when we called deposed Missoula County Commissioner Michelle Landquist a machine for generating intemperate quotes? There was still a little gas left in the tank this morning, when Landquist placed the blame for her primary loss squarely on the town’s voters. “Missoula let Missoula down,” she told the Missoulian. “I thought Missoulians were much more engaged in the election process and getting people in office that they trust.” She shook her fist at a passing cyclist, urging him to read a newspaper or something.

It’s a harsh lesson to learn, but you mustn’t overestimate the loyalty of your so-called partners. Earlier this year, Netflix paid Verizon for faster streaming on its network, in an early glimpse of the telecommunications market after net neutrality. Yesterday, Verizon sent Netflix a cease and desist letter re: an error message saying “the Verizon network is crowded right now.” It seems the content provider is not getting the bitrate it paid for from the utility. Now you know how we feel, Netflix.

Of course, none of these he-said/she-sued shenanigans would be happening if the FCC had preserved net neutrality, a subject John Oliver hilariously incises in this 13-minute video:

That was funny and instructive, right? I was totally watching it with you, and not making those wrenching yelps you heard from the bathroom. While I wasn’t in there, I did some reading on the somehow underreported fact that new FCC chairman Tom Wheeler is a former cable lobbyist. Surely we could pass some kind of law against that, right? Lobbyists are registered with the federal government, and FCC chairpeople are registered with the federal government, so couldn’t we make it a rule that your name can’t appear on both lists? The important thing is that television news never mentions that television companies used to pay the guy in charge of regulating television to convince the government not to regulate television.

It seemed like a fun invention when it started out. The problem was that everybody wanted to watch it, so eventually all the shows were about fat guys whose beautiful wives loved their funny way of complaining. A good idea in the hands of common people will itself become common, Nietzsche said. Who knows what he meant, though? It’s easy to misread him, as the University College London’s student union did when it banned a philosophy club devoted to the Mustache of Basel and other German philosophers. Props to Caroline for the link. I think we can agree that what the university system needs to preserve its integrity is more forbidden ideas. And would it kill us to all wear the same kind of robe?

It starts as celebration and ends in mourning. This morning has extended well into afternoon, and my hangover subsides as the Nile gently subsides from the valley: hardly, leaving behind a lot of muck. Let these links be a lesson to you: the public is capricious and full of bad ideas for you to join. Damn you, Ben al-Fowlkes! Your drink and false promises tricked me into hoping once again.