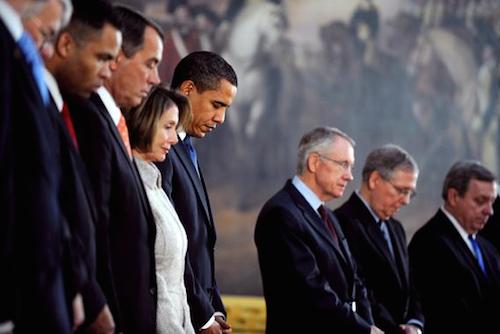 Here’s Kennedy on why prayer before government meetings doesn’t violate the establishment clause:

Ceremonial prayer is but a recognition that, since this Nation was founded and until the present day, many Americans deem that their own existence must be understood by precepts far beyond the authority of government.

I don’t think anyone would argue that such prayers don’t recognize religion’s long tradition in the United States. Many Americans believe that their existence must be understood in terms of god or gods, and that probably does partly account for widespread ceremonial prayer—not just at town meetings but at family dinners, Rotary Club galas and halftime. Kennedy didn’t say that such prayer is partly a recognition of that history, though. He said it is “but a recognition”—but meaning only.

Here we run afoul of our old enemy nominalization. Kennedy’s construction redefines prayer as a recognition, in a way that simultaneously implies it is innocuous and hides his assumption. He’s ruling on what prayer does, but his nominalization shifts the sentence to what prayer is. Consider how the same content reads differently with “is but a recognition” and other phrases shifted to active-verb form:

Ceremonial prayer merely recognizes that, since this Nation was founded and until the present day, many Americans understand their own existences by precepts far beyond the authority of government.

Here Kennedy’s assumption becomes more noticeable, even questionable. When we pray before a town council meeting, are we taking a moment to recognize that religion is important to many Americans, or are we doing something else? If you wanted to acknowledge the significance of religion in America—in a history lecture, say, or a marketing meeting for Frankenchrist—would praying be the best way to do it?

To call any prayer “but a recognition” is to ignore a fundamental aspect of praying: some people believe it lets you communicate with god, and some people don’t. Everyone recognizes that religion is a significant part of many Americans’ understanding of themselves. But when the council engages a chaplain to lead an opening prayer before a town meeting, they’re not asking attendees to participate in that recognition. They’re asking them to participate in that understanding.

We return to a difference that becomes more clear in verb form. When you pray, are you recognizing something or participating in something? Few would claim that the Pledge of Allegiance is a formal way to recognize that patriotism has been an important part of many Americans’ understandings of themselves. When kids say the Pledge, they are participating in that allegiance.

Similarly, Galloway and Stephens did not complain that they were being unfairly forced to recognize America’s religious history in order to participate in local government. They complained that they were unfairly forced to pray, to participate in (Christian) religion. Kennedy’s buried assumption that municipal prayer merely recognizes other people’s beliefs, rather than demanding an expression of such belief, dodges the fundamental issue of the case.

I don’t pray. I don’t think there is a god—in Kennedy’s terms, I don’t deem that my existence must be understood by precepts beyond the reach of this world—and so when a group of people prays around me, I have two choices. I can refuse, which is a polite but uncomfortable way of saying that I think everyone in the room is wrong. Or I can fold my hands and lower my head, which is a kind of lying.

I don’t think I would feel guilty for fake-praying at Christmas dinner if I were merely acknowledging the importance of religion to other members of my family. I don’t think it would be possible to do something like that dishonestly. So why, when I bow my head and wait for someone to stop talking to god, do I feel like I’m doing something different from everybody else?