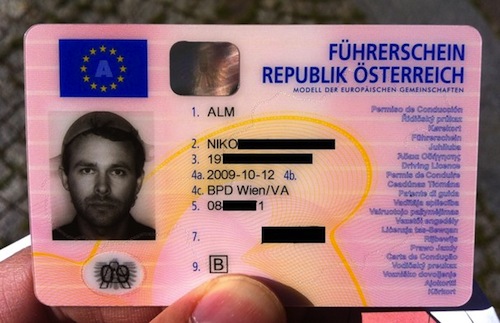 Fun fact: in Austria, you are prohibited from wearing a hat or other headgear in your driver’s license photo unless you are doing so for religious purposes. This policy holds to Austria’s motto, We Promise Never To Be Dicks About Yarmulkes Again, but it also creates an interesting dynamic. We can all agree that a decent society does not prohibit individual religious expression. In the case of the Austrian driver’s license hat, though, all forms of individual expression are prohibited except the religious. It seems we are headed toward that donnybrook of liberal democracies, the scenario in which everyone is treated equally but some people get treated especially equally. Enter Niko Alm: Austrian, atheist, insists on wearing a pasta strainer on his head.

You can kind of see it in the photo, which I’m sure is a real conversation-starter with the bouncers at Vienna’s many Joy Clubs. Alm won the right to wear a colander in his driver’s license picture after a two-year fight with Austrian authorities*

that involved, among other sworn assertions, securing a psychologist’s assessment that he was mentally competent to drive. Niko Alm is not crazy. He is eccentric, though, as evidenced by his commitment to that most insulting/fun of atheist tropes, the Flying Spaghetti Monster. In his explanation to the Austro-DMV, he claimed that he was required to wear the strainer by his religion, Pastafarianism. In his explanation to the Washington Post, he was less coy. “I am a person who believes in the equality of all people,” Alm said. “I consider priviliges due to religious or any other type of belief as anti-democratic. So I wanted to apply the same exception to my headgear.”

Here we reach the crux of the matter. Where does tolerance of religion become, as Alm puts it, “privilege” of religion? In the United States, at least during the last 50 years north of the Mason-Dixon, we do not pit one religious belief against the other. The Senate has not conducted lengthy hearings to determine which branch of Protestantism is the true faith, and we do not afford graded rights to Jews, say, that are more expansive than the rights given to Scientologists. It’s all just religion, and our official position is to leave religious ideas alone.

The problem is that generally, liberal democracies are based on the free exchange and—dare I say it?—comparison of ideas. I may be as deeply committed to Keynesian taxation and public works schemes as you are to Methodism, but if I want the government to adopt them I’m going to have to argue and prove stuff. This principle is not strictly limited to public life, either. If I consider recreational marijuana use the inviolable right of private citizens in private homes, I can’t just start doing it and argue committed belief. I have to convince people, and to do so I must demonstrate the validity of my idea.

So it seems we have two leagues for ideas: the secular, where ideas battle one another in a Thunderdome of rhetoric and evidentiary support, and the religious, where everybody is careful never to say that anybody is wrong. Yet religious ideas are constantly infringing on the secular. Take the debate where the FSM had its origin, intelligent design. Christian groups insist that, like evolution, ID is a theory.*

Each is a matter of belief, and therefore both should be taught in schools.

The difference between these two theories, of course, is that one is supported by observable evidence and the diligent labor of generations of scientists, and the other is supported by a six thousand-year-old story about where the moon came from as told by goatherders. If both of these were regular ideas, it would be a squash match. If both were religious ideas, we would declare them incommensurable and teach neither. But because one idea is secular and one is religious, we are forced to “teach the controversy.”

By making religious ideas a protected class, we have inadvertently made them more powerful than regular ideas in public life. Part of that is because religious ideas have built-in bases of public support. When Michele Bachmann announces that she is running for President partly to prevent gay people from thriving, she gets traction because millions of Americans believe they are bound by their religion to support her. But she also enjoys the advantage of no one saying “that idea is stupid, and you seem to have only read one book.” To do so would be anathema, because it would be attacking her religion.

I don’t believe that we should attack any person for his or her religious beliefs. However, I do believe that we must be able to attack religious beliefs themselves. In discussions of ideas, why you believe what you believe is paramount. How fervently you believe it—no matter how much faith you have that the ether preserves space as an absolute manifold rather than the relational distances among bodies—does not count. You can believe in an idea religiously, but that doesn’t mean I have to tolerate it. I have to tolerate you. The line between the person and the idea is hard to discern, but it is the line between a liberal democracy and a superstitious majority, and we have to locate it.